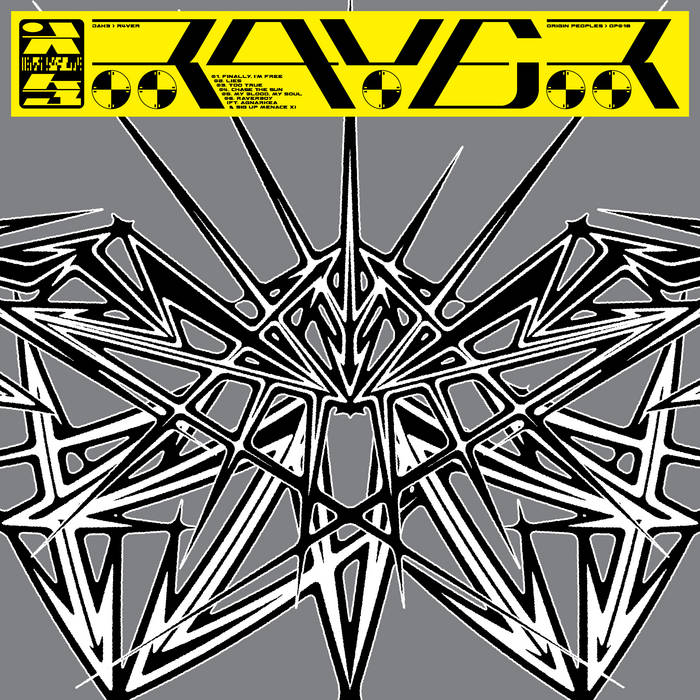 s y n t h b e n t This reminds me of when I'd rave all night long and get so damn tired I'd just sit against the wall outside and hear the muffled music in a half asleep state. Favorite track: Raverboy (feat. Agnarkea + Big Up Menace X).

kohlpipebomb almost unexplainably amazing album, one of my favorites of the year for sure. the unique production and fusion of so many sounds is perfect. jak3 is one of the best out right now Favorite track: Chase the Sun.

Sweeping the bandwidth to find a secure connection, Origin Peoples make contact with cyberpunk auteur JAK3 in the depths of the Pennsylvania underground. Operating on the frontline of a sonic warzone, surrounded by charred buildings and rusted skyscrapers, the producer translates the dystopian urban environment into blackened hybrids of Memphis rap, Detroit sludge and radioactive techno.

New EP 'R4ver' continues in the mode of previous transmission 'Moonlight Radiation', with the producer's divergent influences drawn together and pulled apart across six mutant compositions which shun conventional song structure. ' Once again, the bruised remnants of the Memphis rap movement stumble through the shadows, though here they find neon rave breaks and splintered hardcore motifs, new allies in the battle with inertia. Though the EP lurches and roars through styles and flavours, misfueled and heavy on the gas, JAK3 still conveys a vague progression from the claustrophobic streets of his urban jungle to the open fields and overpowered soundsystems of the free party era, born again in the face of a restrictive culture.

JAK3's world may be a broken dystopia, smoked out and smudged with distortion, but it still has a dance floor, and 'R4VER' is all the survival training you need.

As a member of the sprawling Waistdeep Clique, JAK3 belongs to a new generation of producers, raised by the internet and informed by the immediate risk of societal collapse. Embracing the dystopian influence of late 20th century sci-fi, as well as the recent Memphis rap revival, JAK3 and his contemporaries update the cyberpunk aesthetic for the urban environment, delivering a muscular and aggressive soundtrack for an all too possible future. Turning his Hanover home into a creative hub, the young producer has facilitated a number of collaborations within the scene, not least the scene-defining ‘Kwantum Entanglement’ with Calsutmoran and Agnarkea. All the while, JAK3 sinks deeper into his own sonic universe, constantly honing his own production approach. Caked in a thick patina of distortion, characterised by rumbling sub bass, urban rhythms and erratic structures, JAK3’s compositions reflect the world around him - unstable, reliant on flawed technology and gradually rolling towards chaos. Referential but ultimately radical, these sounds are just the first signpost to JAK3’s musical potential.